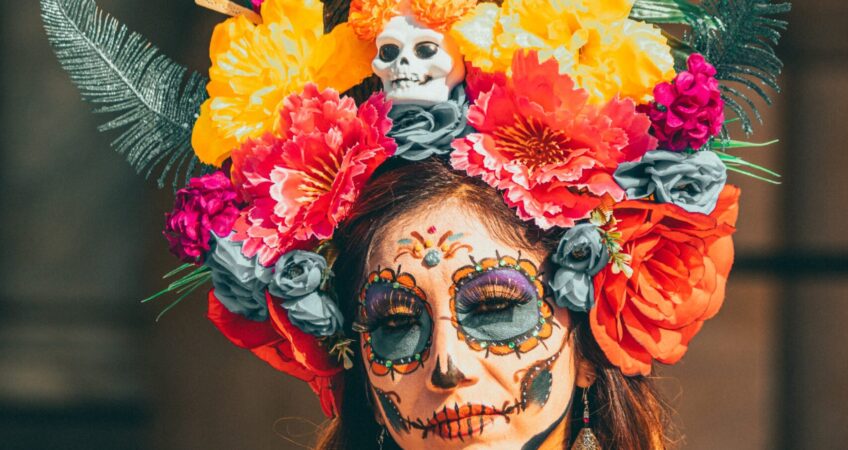 Halloween around the world

Originally, Halloween is a religious celebration that progressively derived to the modern parties worldwide. In Ireland, Canada and in the United States, these parties include scary costumes, sweets, pranks, games, musics and movies. However, some countries have their own way to celebrate.

From October 31st to November 2nd is Dia de los Muertos. During three days, families will decorate their homes and build altars, in order to honor their ancestors who return to their homes on Halloween. Sweets, flowers, pictures, foods and drinks are arranged on these altars. Candles, incense, water and towels help the spirits to clean themselves, before they enter the party with their loved ones. On the last day, families move from their houses to the graveyard to eat all together, while decorating the graves. Some people also like to wear traditional skull makeup and outfits.

On November 5th, bonfires and fireworks are set off in the United Kingdom for Guy Fawkes Night. The Celtic traditions were very different from these fires, as they used to call it Samhain and celebrate it a bit softer. Moreover, as British people are mainly protestants, they do not believe in saints and don’t do anything special for Halloween, except Guy Fawkes Night. In the early 17th Century, Fawkes was a part of a Catholic group and wanted to overthrow the protestant King James. Fires represent the face of Fawkes while children ask for pennies, which is close to sweets in northern America. However, Guy Fawkes is a festival that gradually falls into oblivion and will soon be only an anecdote.

Bonfires, costumes and the famous “trick-or-treat” moments also happen in Ireland. As in the US, the costumed attend parties with games with sweets as treasures and eat a typical Irish cake called barnbrack. Small objects are hidden in the cake such as a ring, to promise a future wedding and straw for a flourishing upcoming year. Irish citizens transformed “trick-or-treat” into “knock-a-dolly” where children knock and run away before somebody opens the door.

Now and to help you find a costume, here is a list of the most classical and famous Halloween monsters:

Willing to book your private jet now? Click this link and let’s fly together!

BIRDY Private Jets is an Air Charter Broker specialized in exclusive private flights. BIRDY provides a 24/7/365 worldwide service and is meant to offer the upmost experience, flexibility, and VIP service to its privileged customers. BIRDY acts as Agent an and as such arranges carriage by air by simply chartering aircraft from third-party aircraft Operators, in the name and on behalf of its customers. BIRDY does not itself operate aircraft and is not a contracting or an indirect carrier.

Just so we can confirm your booking. No cold calling, we promise.

✧ If any of the details provided on your flight request is flexible or incorrect, please advise us without delay

✧ If BIRDY does not get back to you within 24 hours, please consider one of the following explanations: the contact details you provided are incorrect or unavailable (please check your SPAM box) OR the dedicated human Flight Advisor who has been spending time and working hard on your flight request judged that you did not have a reasonable need for a firm quote (inconsistent routes or dates, blacklisted phone number, etc.)

BIRDY uses cookies on this website to give you the most relevant experience by remembering your preferences and repeated visits. By clicking “Accept”, you consent to the use of ALL the cookies.
Do not share my personal information (excl. booking purposes).
Cookie SettingsAccept
Manage consent

This website uses cookies to improve your experience while you navigate through the website. Out of these, the cookies that are categorized as necessary are stored on your browser as they are essential for the working of basic functionalities of the website. We also use third-party cookies that help us analyze and understand how you use this website. These cookies will be stored in your browser only with your consent. You also have the option to opt-out of these cookies. But opting out of some of these cookies may affect your browsing experience.
Necessary Always Enabled
Necessary cookies are absolutely essential for the website to function properly. These cookies ensure basic functionalities and security features of the website, anonymously.
Functional
Functional cookies help to perform certain functionalities like sharing the content of the website on social media platforms, collect feedbacks, and other third-party features.
Performance
Performance cookies are used to understand and analyze the key performance indexes of the website which helps in delivering a better user experience for the visitors.
Analytics
Analytical cookies are used to understand how visitors interact with the website. These cookies help provide information on metrics the number of visitors, bounce rate, traffic source, etc.
Advertisement
Advertisement cookies are used to provide visitors with relevant ads and marketing campaigns. These cookies track visitors across websites and collect information to provide customized ads.
Others
Other uncategorized cookies are those that are being analyzed and have not been classified into a category as yet.
SAVE & ACCEPT